Learn what to look for in a dog toothbrush and see our top picks!
Home » Blog » Staffordshire Terrier Vs Pitbull: How They’re Different

Are you considering adopting a dog? If so, it’s best to learn all there is to know about which type to adopt because there are so many options to choose from. One of the most well-known dog breeds is the Pitbull (officially called the American Pit Bull Terrier); they’re loyal and compassionate, and you can train them to be excellent guard dogs. Other breeds look similar to the Pitbull, including the Staffordshire Terrier (officially called the American Staffordshire Terrier).

We’re here to discuss the difference between the two. We’ll look at the history of the Staffordshire Terrier versus that of the Pitbull and why they seem so similar. We’ll also explore some top tips on how to care for both breeds properly.

The History of the American Pit Bull Terrier

The history of the Pitbull breed dates back to the 1800s in the United Kingdom. They were originally bred from the Old English Bulldog, which people used in the cruel blood sport of bull baiting. By 1835, Parliament outlawed the baiting of bulls, but people found ways around this. They used Bulldogs for rat-baiting instead, which happened in pits in the ground (which is where the Pitbull eventually got its name from). As more laws were instituted against baiting, immigrants from the British Isles came to the United States and brought their Bulldogs with them.

The Bulldogs were repopulated over multiple generations. Over time, the Bulldog evolved into the American Bully breed we know today as the Pitbull. The Pitbull was used in the United States to herd animals like cattle and other livestock and as a family guard dog. They were good with humans and never seemed to be aggressive towards children, which transitioned them into their role as family pets as well. The History Of The American Staffordshire Terrier

The history of the Staffordshire Terrier is very similar to that of the Pitbull. It began at the same time and place—the 1800s in the United Kingdom. In the UK, the Old English Bulldog breed was used for blood sports and dog fighting. The Bulldog was then bred with a terrier dog because terriers are known for their intelligence and strength. For people who owned dogs participating in blood sports, this combination would stand to produce a dog that would be the best of the best in these illegal sports.

Organizations like the American Kennel Club didn’t want to recognize or be associated with a dog breed used for blood sports. They did not recognize the Staffordshire Terrier until the 1930s, over 100 years after the ban on baiting. They still do not recognize the Pitbull, but the United Kennel Club (UKC) does. The Staffordshire Terrier vs Pitbull: Similarities Between Them

Many things lead people to believe that these two dog breeds are the same. Let’s take a look at some of the traits that make them seem similar to one another.

Many people believe the Pitbull and the Staffordshire Terrier are the same because of their coat types. They both have shorter fur that’s very easy to manage with regular grooming. The two breeds also exhibit similar coat patterns and markings.

Both breeds are muscular. Because the original Bulldog was bred for dog fighting, they were short and stocky with a lot of muscle mass. Even after the two breeds (Staffordshire Terrier and Pitbull breeds) became distinguished from one another, there was no getting rid of years of genetics, and both continued to be muscular breeds. This is especially because they used many dogs on farms as livestock or family guard dogs. Both breeds are very active. Even after the ban on blood sports and baiting, both the Pitbull and the Staffordshire Terrier remained active breeds. Farmers used the Pitbull to herd livestock, so the breed was often active for the majority of the day. Staffordshire Terriers were used for similar purposes, such as livestock herders and family guard dogs. They were always running around and had to remain on high alert. Even today, both breeds are still very active and love to play.

Differences Between the Staffordshire Terrier vs Pitbull

Now that you know more about the similarities of the breeds let’s look at some differences between the Staffordshire Terrier and the Pitbull; they are in fact a separate breed from one another! 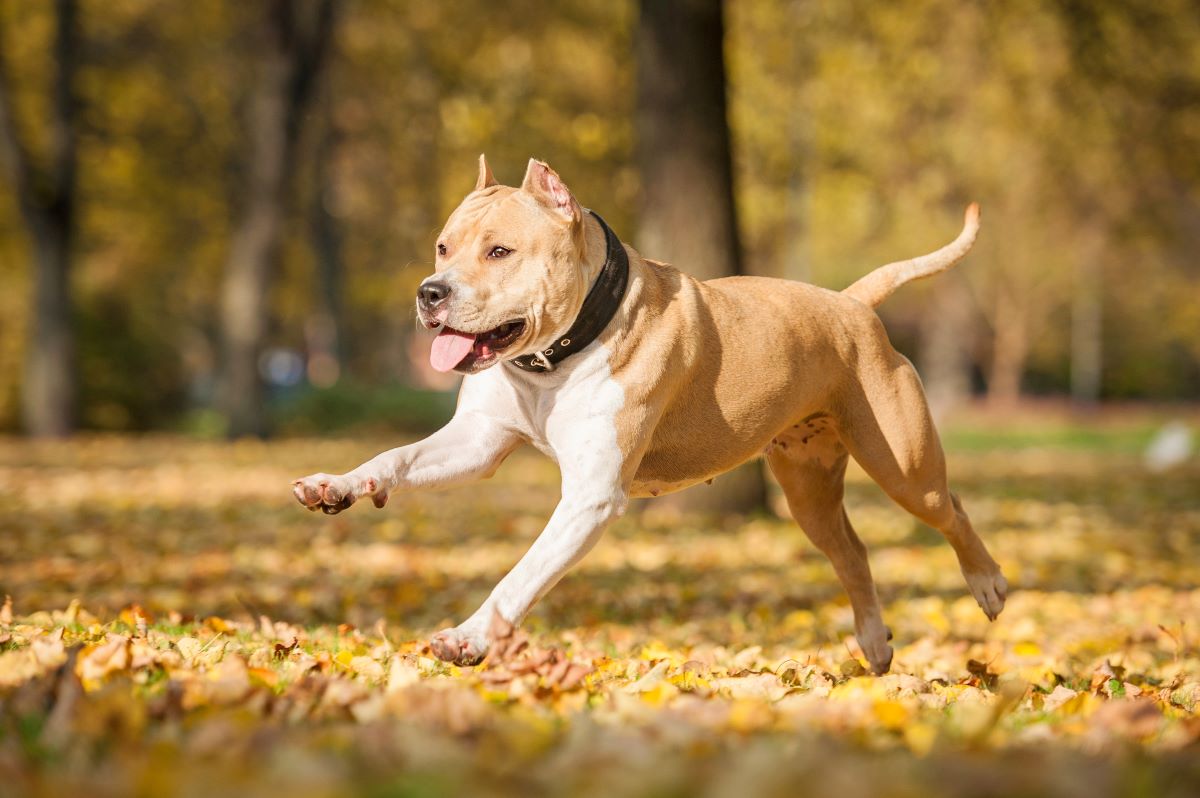 When looking into the personalities of a Staffordshire Terrier and a Pitbull, minute differences set the two apart. One misconception about these breeds is that they’re inherently aggressive and dangerous, especially toward children. Despite being used for terrible purposes in the past, they are not vicious toward people, especially if properly socialized and trained. The Staffordshire Terrier is an extremely friendly, loving, loyal, and courageous dog. You can train them to be guard dogs, but they would prefer to be happy and not on high alert. Though they may be friendly and loving, they can be stubborn with training and may need a lot more positive reinforcement than a Pitbull. The Pitbull is known as the nanny of all dogs. They love looking after their humans and are very protective of them. The Pitbull makes for a good guard dog and watchdog if trained properly. The biggest difference between a Pitbull and Staffordshire Terrier is the Pitbull‘s predisposition to exhibit aggressive behavior toward unfamiliar dogs if they aren’t properly trained. The Accepted Colors of the Two Breeds

How to Properly Care for a Staffordshire Terrier

Feeding your Staffordshire Terrier raw meat will allow him to consume plenty of the protein and vitamins that meat offers. It is good practice to ensure the meat is fresh, so there’s no risk of parasites or other bacteria. You can feed him a variety of raw meats, including chicken, turkey, steak, and many others.

Giving your Staffordshire Terrier ground bones and vegetables will allow him to consume calcium and other vitamins/minerals that he won’t be able to get from eating raw meat.

Staffordshire Terriers also benefit from eating fruit. Fruit will help them stay naturally hydrated and get additional vitamins and antioxidants. They can eat fruits such as apples, bananas, pumpkin, and blueberries. However, you should not feed them grapes, avocados, cherries, or tomatoes. These fruits have chemicals in them that make dogs sick.

Tips for Training a Staffordshire Terrier How to Properly Care for a Pitbull

Now that you understand how to properly care for a Staffordshire Terrier, we’ll talk about how you can best care for a Pitbull.

The main nutritional foods that keep a Pitbull healthy are raw bones, raw meats, fish, small amounts of greens, certain herbs, vegetables, fruit, and eggs. This list will help you to understand why Pitbulls need to eat these foods.

Pitbulls need raw bones in order to keep their calcium levels high. This helps with bone development and maintenance.

Pitbulls need to eat meat to consume protein and other trace minerals contained in the meat. They can eat just about any meat, including chicken, pork, lamb, oxtails, turkey, and ducks.

Fish contain many nutrients Pitbulls need to stay healthy, including Vitamin B1 and Omega 3 Fatty Acids.

These foods help Pitbulls get all the vitamins and minerals they need that aren’t in many processed dog foods and raw meats. However, there are some fruits and vegetables that dogs will get sick from. These include avocados, cherries, grapes, tomatoes, asparagus, mushrooms, and onions.

Giving Pitbulls raw eggs (including the shell) will provide them with calcium for bone health and balance out the  phosphorous in meat and fish.

Tips for Training a Pitbull

Pitbulls have different personalities than Staffordshire Terriers, so they will have to be trained differently to maintain all their positive personality traits. One of the top tips for training a Pitbull not to be aggressive towards other people and dogs is to socialize them, especially when they’re puppies. According to Certified Professional Dog Trainer Minette, “Aggressive training techniques can often create aggression.” By socializing them properly, they won’t be as jumpy or aggressive. Pitbulls also benefit from positive reinforcement. By positively reinforcing desirable behaviors, a Pitbull remembers those behaviors and will naturally be drawn to doing them. One last tip for training a Pitbull is to keep them occupied. By having a goal to work towards, they’ll accomplish certain tasks and remember desirable behaviors. As mentioned previously, Pitbulls have different health concerns than Staffordshire Terriers. Therefore, they’ll require different care to keep their health in check. One of the best things you can do for your Pitbull is to feed him a proper diet and give him plenty of exercise. That will ensure he’s in good shape and stays happy and healthy. Another factor you’ll want to consider is regular vet visits. Getting your Pitbull a checkup annually (or if other concerns come up) ensures he gets all of his vaccines and has no health issues.

Although the Staffordshire Terrier and Pitbull are separate dog breeds, they share similar looks and traits, and even similar histories. Despite the negative perceptions people have of them, they are both friendly breeds that make perfect companions for just about anyone. Whether you’re looking to adopt a Staffordshire Terrier or a Pitbull, we hope this article was able to clear up any confusion and help you become more educated on both beautiful breeds.

Get our updates and expert resources - FREE! We use cookies on our website to give you the most relevant experience by remembering your preferences and repeat visits. By clicking “Accept All”, you consent to the use of ALL the cookies. However, you may visit "Cookie Settings" to provide a controlled consent.
Cookie SettingsAccept All
Manage consent

This website uses cookies to improve your experience while you navigate through the website. Out of these, the cookies that are categorized as necessary are stored on your browser as they are essential for the working of basic functionalities of the website. We also use third-party cookies that help us analyze and understand how you use this website. These cookies will be stored in your browser only with your consent. You also have the option to opt-out of these cookies. But opting out of some of these cookies may affect your browsing experience.
Necessary Always Enabled
Necessary cookies are absolutely essential for the website to function properly. These cookies ensure basic functionalities and security features of the website, anonymously.
Functional
Functional cookies help to perform certain functionalities like sharing the content of the website on social media platforms, collect feedbacks, and other third-party features.
Performance
Performance cookies are used to understand and analyze the key performance indexes of the website which helps in delivering a better user experience for the visitors.
Analytics
Analytical cookies are used to understand how visitors interact with the website. These cookies help provide information on metrics the number of visitors, bounce rate, traffic source, etc.
Advertisement
Advertisement cookies are used to provide visitors with relevant ads and marketing campaigns. These cookies track visitors across websites and collect information to provide customized ads.
Others
Other uncategorized cookies are those that are being analyzed and have not been classified into a category as yet.
SAVE & ACCEPT
Home » Blog » Staffordshire Terrier Vs Pitbull: How They’re Different